A place to discuss things that aren't specific to any one creator or game.
Forum rules
Ren'Py specific questions should be posted in the Ren'Py Questions and Annoucements forum, not here.
Post Reply
9 posts • Page 1 of 1
Message
Author

That's very good info! Thank you so much Eyzi for your advice!
Good to know how it helped you since I think our starting audiences are probably a similar size.

So...be prepared for a lot of work to increase your popularity so that you can have a successful KS, rather than the other way around.
A Close Shave:
*Last Thing Done (Aug 17): Finished coding emotions and camera for 4/10 main labels.
*Currently Doing: Coding of emotions and camera for the labels--On 5/10
*First Next thing to do: Code in all CG and special animation stuff
*Next Next thing to do: Set up film animation
*Other Thing to Do: Do SFX and Score (maybe think about eye blinks?)

Maybe I should add my two cents here.

I do understand the various reasons why our campaign is failing to meet its goal, but I have no regrets running it, and running it in the way we did. I feel the positives, in the long run, outweigh the negatives. It pushed me personally to get a number of things in order as soon as possible, and allowed me to start planning for how we can market it for its release. The way I see it, you've got nothing to lose by giving it a go.
CRIME OPERA STUDIOS

Thanks for your opinions, trooper6 and sbester!
It's interesting how split the dev community seems to be on this - I ran a poll on twitter with very similar results. 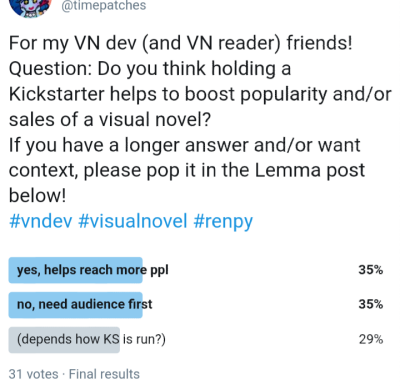 I've done four Kickstarters so far and I've been fortunate enough to have all of them be successful. Though each have been small scale with goals less than 5,000. But I certainly think it's been worthwhile. It's always hard to get people to care about a game/studio they've never heard of and, from my experience, Kickstarters do seem to get more people to check out what you're doing. The same type of post as a normal update doesn't garner as much attention as when the post is associated with an active Kickstarter. It gives people a reason to look into your project then instead of maybe checking it out later when it's further along if they happen to remember, which is crucial. And if you do have only a few fans they're more likely to help spread the word when a crowd-funding campaign is going on. So even if you don't have a major audience already, the Kickstarter can still help in that way. Though, that's just how things have gone with my campaigns.
In-Progress:
Floret Bond, XOXO Blood Droplets, Our Life
Released:
A Foretold Affair, My Magical Divorce Bureau, XOXO Droplets, Lake of Voices
Top

For another stat, while our project had 1,767 backers, around 10,000 people viewed the video on our project's Kickstarter page (with another 2,000 views coming from off-site views, e.g. people using the embedded video player that appears when linking the project on sites like Reddit). For comparison, we uploaded the same video to Youtube, where it only has around 5,000 views. Over 10% of Kickstarter video viewers watched the entire video, which struck me as pretty high considering that the video is over 10 minutes long. It is worth noting however that Kickstarter doesn't track the referral source for video views, so there's no way of knowing whether the people who watched the video are folks who discovered the project through Kickstarter or were linked to the campaign page from an external source.
Necrobarista - serve coffee to the living and the dead
Idol Manager - experience the glamour and dangers of the pop idol industry
Cursed Lands - a mix of high fantasy and gothic horror
Top
Post Reply
9 posts • Page 1 of 1