A place for game announcements, and for people to discuss games being made.
Forum rules
Please read the sticky before creating a new topic. Linking to Kickstarter/Crowdfunded games requires a demo.
Post Reply
11 posts • Page 1 of 1
Message
Author

XOXO Blood Droplets is a cute, comedic, and creepy Visual Novel. The goal is to somehow romance a murderous boy without having the crazy dudes you didn't pick (or even the one you did) end your life. It doesn't tend to go well. In fact, usually it's pretty horrific.

XOBD is not suited for a younger audience.


We released a dating sim about jerky dudes called XOXO Droplets in 2017. Now the boys are back and worse than ever. They’re returning to continue being unnecessarily difficult with the added bonus of also killing people and being generally insane. Of course that’s no reason to stop trying to romance them. You don't need to play the original game to understand this one.

There’s already a demo available, feel free to give it a look!

Also, you're welcome to join us in our Discord Channel if you'd like to live chat with us and other fans. We’d be happy to see you there!

Story:
JB has been attending the fancy boarding school Saint Sara Belle for almost a year now. Along with six others, she’s forced to join an after-school group created for students that are deemed ‘unfriendable’. JB is fine with that, especially ‘cause one of the awful people there is her special someone. It doesn’t matter that he has trouble getting along with people and is a murderer; he’s still perfect to her!

No matter how many sparkly hearts consume her vision at the beginning, anything can happen in this place. The amount of twisted, winding ways the story can unfold is frightening. All you can count on for sure is that it will be crazy.

Features:
-6 Insane Suitors
-18 Storylines
-70 CG images
-150 Endings!
-Determine your conclusion by making many painful choices Solve your problems with the MC’s charisma or just through violence
-Partial voice acting for every character by the original talented cast 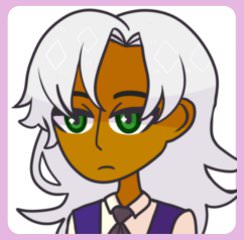 Pran is a pain. Getting this rock-man to do what he’s supposed to do is infuriatingly difficult. Rules, laws, desperate begging all have no sway on his cold rebel. He somehow hates everything, including himself, while simultaneously reacting indifferently to it. Pran thinks humans are inherently evil. They’re deserving of everything awful that comes to them. And, even more unfortunately, the only thing he gets a kick out of is the suffering of others. 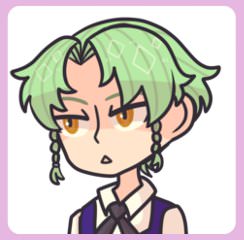 Jeremy is king buzzkill at this school. If anyone is having too good of a time, this one will be right there to remind them of how futile existence is. Overall, he’s a pushover, but something he can’t brush off is his obsession with cleanliness. Things that are “pure” in Jeremy’s eyes need to be protected from the revolting germ swarms known as “other people”. This sad sack also used to be highly volatile. That trait may not have completely faded. 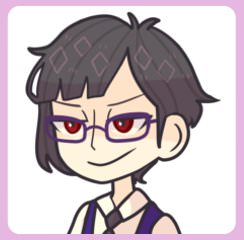 He’s literally some kind of demon. Being in the sun saps Bae of energy causing him to act ungodly lazy during the day. That, plus his immovable ego, make it hard to imagine how or why he’d kill someone. So, weirdly, the monster man who’s hated by pretty much everybody seems like the “safest” groupmate. That impression is wrong. Bae’s inhumanness gives him the option to kill anyone at any time. The thread stopping him from doing so is thin. 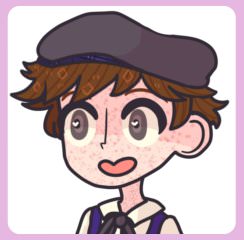 Shiloh is a stalker with a multi-layer manipulation game. He acts like a good little boy and does as he’s told, as long as it somehow aids in reaching his greater purpose. Shiloh has no fighting skills or even a weapon, but his ability to ruin or end lives with words alone cannot be understated. He knows most everything about everyone while others have no idea what his true intentions are. Regardless, this freckle face is devious and ruthless. 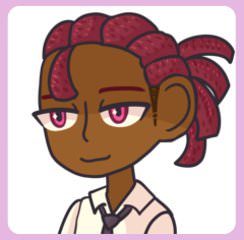 Nate is the school’s biggest star in academics and athletics. He’s also assumed to be the best-behaved. Faculty trust him so completely that he’s allowed to enforce rules on other students. He will not hesitate to bring down judgement. Sometimes that means detention, sometimes execution. While he insists that most people leave him alone to focus on his endless list of tasks, Nate is desperate to keep the few people he is friends with. Though they can't get too close. 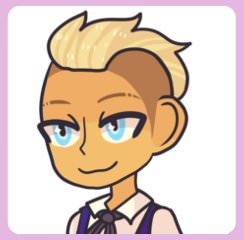 A rude hipster boy who can go from one to one hundred in a literal second. There’s always a risk of him suddenly lashing out. And for Everett to be fully content people have to go out of their way to appease him. He’s certainly not opposed to returning the favor to those he’s fond of, though. Everett is considered popular and has come to expect people to side with him by default. It won’t be pretty if someone goes against that assumption.

Questions:
Do you have a favorite killer so far? If so, who is it?

Did you know anything about the original XOXO Droplets before seeing this? Does the knowledge (or lack of knowledge) of that game impact your opinion of this game?

Thank you so much for checking this out!
Last edited by Googaboga on Tue Dec 18, 2018 1:27 am, edited 2 times in total.
In-Progress:
Floret Bond, XOXO Blood Droplets, Our Life
Released:
A Foretold Affair, My Magical Divorce Bureau, XOXO Droplets, Lake of Voices
Top

XOXO Blood Droplets is now live on Kickstarter! We’re excited to finally put the spotlight on our crazy babies. Please give it a look. There’s a lot of interesting stuff on there, including tiers for early birds, a full guide book, and physical charms.


Support Us On Kickstarter! 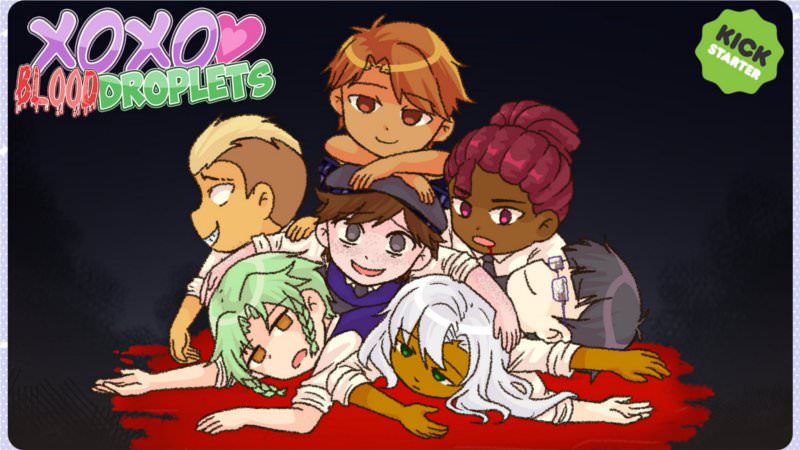 And just as importantly, the far longer and overall much superior demo has been released. The length has almost doubled and there's been lots of general improvements. It includes several ‘to be continued’ types of conclusions and 13 Bad Endings to find. If you’re looking for something spooky to play today, I recommend that. It’s important to note that saves from the older demo aren’t compatible with this newer version so please start a fresh file.

We're ten days into the campaign and our current goal on the Kickstarter is to reach 100+ backers. We’re single digits away from that mark now! Once we’re there we’ll be doing a special Kickstarter exclusive Q&A. If you haven’t backed yet, please consider doing so!

We've also started a raffle to give away some merch from the game! Feel free to check that out~

I love the artsyle! It's so cute and fun, which nicely contrasts with the horror-y theme. We'll definitely be backing

@Gabmag
Aaw, thank you so much! I'm glad you like it.

We're in the final 48 hours of this campaign! We're only $100 away from our second stretch goal. Here's hoping we can reach it.

Well, that's certainly an interesting premise! Fortunately, I believe there's a simple solution to the dilemma the rejected characters cause. They can't murder you if you murder them first! Flawless plan, I say.


Do you have a favorite killer so far? If so, who is it?

Hard to say (I've yet to play the demo, doing so right after typing this post). From the pictures and descriptions alone, I might be a bit partial to Taylor, but that's hardly set in stone. Ultimately, I think the MC is the one I'm the most curious to learn about in this scenario.

Well, having characters not die seem to defeat the point of this game, doesn't it? I mean, I guess a "golden" ending where everyone is alive at the end would be welcome - especially if getting there is appropriately challenging - but I think I'm more curious about the amount of bad ends / whether or not the MC can be proactive when it comes to dealing with the competition.

Did you know anything about the original XOXO Droplets before seeing this? Does the knowledge (or lack of knowledge) of that game impact your opinion of this game?

Not at all! Then again, I'm rather new to the whole genre, and hardly the most assiduous follower.
"So many things to do, so little time."
Top

Thank you so much for answering our questions! I really appreciate the feedback. And I hope you'll have a good time with the demo. It only includes unfortunate endings for the MC, but the full game will have better outcomes for her and more opportunities to fight back, haha.
In-Progress:
Floret Bond, XOXO Blood Droplets, Our Life
Released:
A Foretold Affair, My Magical Divorce Bureau, XOXO Droplets, Lake of Voices
Top

Well, my first playthrough consisted of me attempting to romance your avatar, and quickly meeting a gruesome end for my troubles. Dear lord, that went awry fast. In completely unrelated matters, Jeremy is now moving up on my "stab preventively" list. Probably a coincidence.

... why do I have the feeling this list is going to be crowded very quickly and shuffled constantly?

But yeah, this sounds fun! I have yet to find the time to do multiple playthroughs and explore each choices and consequences, but I'll get there! ... eventually.
"So many things to do, so little time."
Top

Ah, I finally checked it out!

I'll have to checkout the original XOXO Droplets as well. Thanks so much for making a cool game like this. Best of luck! ^^

@Macros
Thank you very much for giving the demo a go! Haha, I'm sorry about the unfortunate conclusion. These guys are hazardous to the health. I hope you'll enjoy the rest of the endings whenever you get a chance to play them.

@nerupuff
Thank you! I'm so glad you like it. There will be plenty of terrible deaths to come, haha. I hope you'll have some fun with the OG XOD as well.
In-Progress:
Floret Bond, XOXO Blood Droplets, Our Life
Released:
A Foretold Affair, My Magical Divorce Bureau, XOXO Droplets, Lake of Voices
Top
Post Reply
11 posts • Page 1 of 1