Heart of the Party [BxG][Fantasy][Romance]

A place for game announcements, and for people to discuss games being made.
Forum rules
Please read the sticky before creating a new topic. Linking to Kickstarter/Crowdfunded games requires a demo. Updates to Patreon-backed games may be posted once every 2 months. Adult content should not be posted in this forum.
Post Reply
12 posts • Page 1 of 1
Message
Author

Heart of the Party [BxG][Fantasy][Romance]

"For the budding adventurer, there is no place with more ample opportunity than Locesca. Territories swap hands endlessly between squabbling nobles, ensuring no shortage of mercenary work. Long-abandoned settlements and catacombs promise undisturbed treasures, and the unnatural creatures and banditry that roam the countryside provide a steady flow of quests for those so inclined to grasp fortune and glory.”

“Nestled in the beating heart of Locesca is Anghor Thom, a neutral city-state that has long since removed itself from the chaotic ebb and flow of the region. In Anghor Thom goods peddlers and mages alike can practice their craft in relative safety. Adventurers find work and like-minded companions, and those that are simply lost are swept up in the energy of the city. It is a place of new beginnings for many. Will it be for you as well?”


In Heart of the Party you play as Oran Vissel, a healer/illusionist in a party of fresh-faced adventurers attempting to make something of themselves in the bustling city-state of Anghor Thom. In the wake of sudden tragedy, Oran and his friends find themselves tackling unexpected questions and heading in unforeseen directions. This is not a story of a grand quest to save the world, but rather a look into the day to day life of common adventurers as they deal with loss, aimlessness, friendship, and love.

A daydreaming spirit mage and the player character, Oran uses his healing and illusion magic to support the party from the back lines. His calm and easygoing demeanor along with natural magical talent has let Oran coast through life undisturbed for the most part, but recent events cause him to reevaluate his surroundings. Oran may become more outgoing and resourceful or more inquisitive and empathetic depending on the player’s choices.

Oran’s childhood friend, a bookish village girl with an enormous heart. While Sable lacks a role in combat she does care for the group in a more domestic sense. Her genuine sunny disposition and borderline motherly attitude towards the party keeps the group in high spirits. She worries not only for her friend's safety in such a dangerous profession, but also about her own role in the slowly changing party.

A proud noblewoman and the party's expert on all things arcane. The Lambelle house has recently fallen upon hard times, something that Evangeline seeks to rectify herself by gaining prestige as an adventurer. While new to adventuring itself Evangeline is a gifted arcanist with a proficiency for lightning-based spells. Quick of mind and ambitious, Evangeline respects those that can stand as her equal and is rather protective of the friends she has.

Ralta is a perpetually tired apothecary who sells supplies to the group and occasionally finds herself reluctantly joining them on the odd quest. Having been turned undead in an incident years ago, she hides in her shop and uses her meager profits to fund her research into reversing her curse. Ralta's lack of social tact and morbid humor might be off-putting to some, but if Oran chooses to help out in her shop he will find she's surprisingly good company.

A runaway rogue from a distant desert land. Small and agile, Ninnon has a number of useful skills that are key to any adventuring party worth their salt. What Ninnon can't do is speak the local language (at least at first). Shy but eager to prove her usefulness, Ninnon only wishes to properly be able to convey her feelings to the other members of her party.

The group's frontline fighter and the most active in seeking out quests, Alva strives to be a renowned adventurer like her father. She's a tomboy to her core, straightforward in both combat and conversation. Alva’s crass attitude might get her and her friends into trouble sometimes, but she's always there to help with an encouraging shout and a clenched fist.

A crackshot mechanist with a silver tongue. Naturally inquisitive and effortlessly charming, Gil serves as your self-proclaimed wingman (Though he does most of the flirting himself.) Anything and everything is a game to be played and won in Gil's eyes, and he's likely to provide you with some winning strategies whether you want them or not.

A long-retired adventurer who adopted Alva when her parents disappeared. Though he wishes they would pick a different profession he's genuinely proud of how the party has been improving, especially his daughter. Reynauld may be past his prime, but he has a wealth of knowledge for anyone that can pry it from him.

A foreign diplomat with important business in Anghor Thom who finds herself unintentionally entangled with Gil. Stern and dedicated to her work, perhaps she will be the one to reign in Gil's flippant behavior. 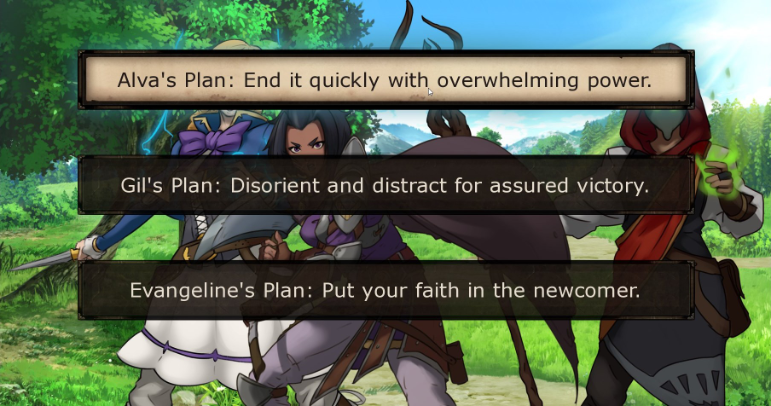 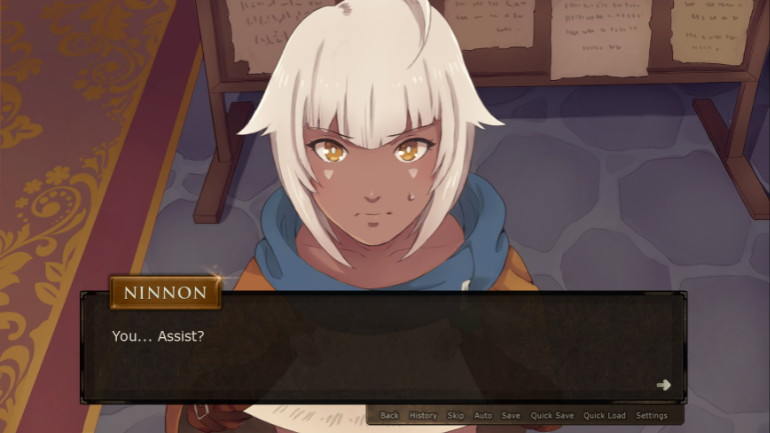 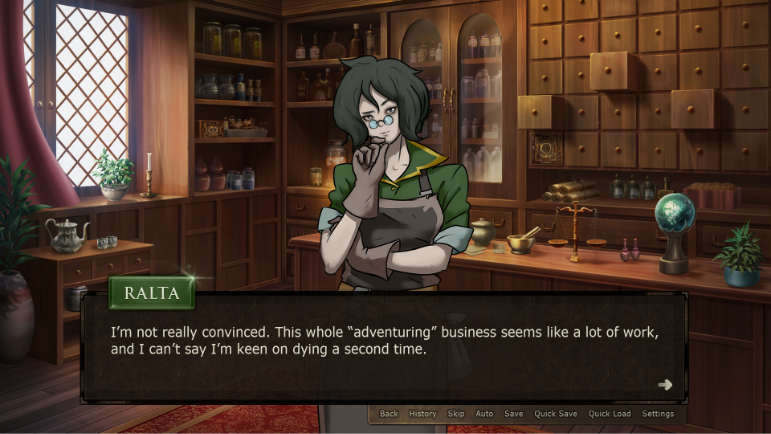 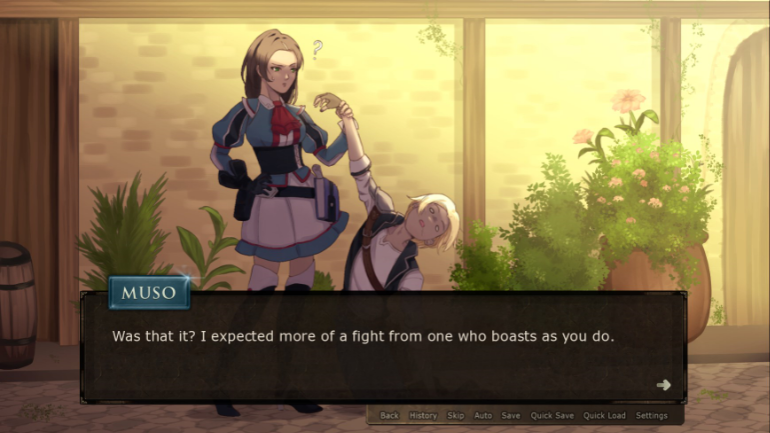 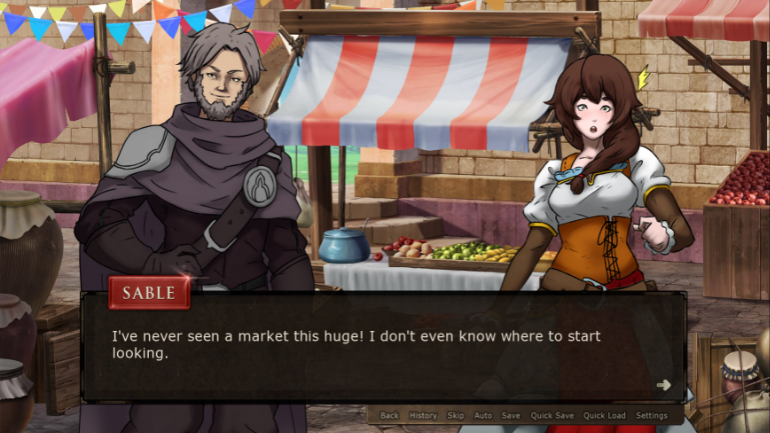 I think you have a pretty nice cast of characters here. I'm especially interested in Ralta's being undead, I'm curious as to how that will affect her story and the romance.
hey hey I made a thing
Top

Zelan wrote: ↑
Thu Nov 29, 2018 11:39 am
I think you have a pretty nice cast of characters here. I'm especially interested in Ralta's being undead, I'm curious as to how that will affect her story and the romance.

Thank you! Ralta's complications have made her a very fun character to write, both in regards to romance and just living in a city full of adventurers. For her actual character sprites I'm hoping to have her look a bit more corpse-like while still reasonably able to be mistaken for just being really, really sleep deprived. Something like so:

Wow this is a great start! I like the world-building you have going on and the character designs are superb. The fact that it's a slice-of-life story in a classic rpg-fantasy setting is also a nice break from the genre, especially since I think the world and the characters bring up a lot of intrigue. Ralta and Ninnon are my favorites so far but I think it's just because I'm really curious about their backstories haha

Keep it up, I'm really looking forward to the updates you'll have in the future!! <3
Top

This is not a story of a grand quest to save the world, but rather a look into the day to day life of common adventurers as they deal with loss, aimlessness, friendship, and love.

This is what caught my eye. Sounds so fun to see a refreshing concept like this!

Brilliant world-building just from the get-go, and amazing art to boot! I love the character sprites. I love Ralta and Evangeline's designs the most, but everyone you've presented here looks great!

I can totally tell that this is a game I'd want to play. I'm so excited for more of your updates on this! Best of luck!

Very interesting, it's a nice take to focus on the slice of life parts of an rpg-like fantasy world while splashing out some action and adventuring. Characters seem really interesting and the art is excellent! Looking forward to this!
Top

Thank you all for the comments. I was really nervous posting this thread but now that's all turned into motivation to work harder!

I'm making good headway on the writing front, about 1/3 of the way through the first act as of now. I was also able to confirm that the same artist that worked on most of the character concepts will be making the actual sprites! Should be more to show off in January when our schedules clear up a bit more.
Top

Took a little longer than I anticipated to get the ball rolling but work on the sprites and backgrounds is now in full swing!

Here's some examples of what we've got so far:

Alva's first up and her complete sprite set should be finished soon! Should have plenty more to show off in the near future. I'll likely move this to the regular works in progress area once I'm able to create a proper mockup/screenshot.
Top

Small update! Here's some screenshots. Both Alva's and Sable's sprites are complete, and multiple backgrounds are done as of now.

Time for another update!

Life stuff got in the way a little, as it always seems to but good news! Everyone in the main cast besides Gil has their sprite sets completed. Backgrounds are about 60% done and CG's are about 75% done.
That means I'm well on track for my goal of having act one complete sometime early next year.
Here's a picture of the romanceable cast assembled to celebrate!

Updated the main post with the new character art and some new screenshots now that the UI is done! As it turns out being stuck in the house all day actually improved how much I work on this, go figure. I'm just slow in general since this is my first go at a project of this size, haha. I'll also be trying to move this from the ideas section to the works in progress section now that I think it's come along enough.
Top

This looks like it's coming along really nicely, I love those screenshots.
hey hey I made a thing
Top
Post Reply
12 posts • Page 1 of 1