Ideas and games that are not yet publicly in production. This forum also contains the pre-2012 archives of the Works in Progress forum.
Post Reply
128 posts
Message
Author

Plot
What Bora thought was a prank, wasn't a prank at all. Her parents are gone and she doesn't know why. The only hint she has is a ripped note she got from her parents, which tells her to go to Nabbeun High School. Nabbeun High School is known for having the worst students in South Korea. Soon after, she gets a new note. In these notes are hints to figure out the identity of the person who kidnapped her parents. If she can't do this in 6 months, her beloved parents will die, and who knows what else....

There are six obtainable guys and about 13 paths.
Surname is first.

Jung Bora
I'm 16 years old. There is nothing else to say about me.

According to Sujin he's 17 years old, but I forgot what else Sujin told me.
He's rude, really rude. I think he needs to learn some manners. I try to be nice to him but he is still so rude. I don't see what's to like about him. Though I guess he can be nice sometimes. He has a twin sister. I think he has a sister complex, because he's only and always affectionate towards her. He's a delinquent and he gets into fights all the time. He always win, but I wish he would lose at least once. He is a leader of a gang that most of the whole schools fear, though he doesn't abuse his power.

According to Sujin he's 16 years old.
He's a stalker. I see him following Minho everywhere. He's taking some kind of notes, but he won't tell me what. When I first met him, I thought he was afraid of girls. He would always studder around girls, but he's perfectly fine around boys. I thought he was gay too, but he has a girlfriend. Juhee did say he was afraid most girls. He tries to look cool, but doesn't that attract more girls? One day I saw him surrounded by girls and I thought he was going pass out. It wasn't my problem, I did warn him, so I walked by ignoring his scream for help.

According to Sujin he's 16 years old.
He's Japanese, but he speaks fluent Korean. He doesn't talk much, though. He ignores everybody. Yoonmi says that when they were younger, he talked a lot and was way nicer. I don't talk to him much but I noticed he is very clumsy. He falls down and up the stairs, he trips on flat surfaces, he hits his head against doors, and so on. Suprisingly, he never gets injured.

Astor Leroy (his surname is last)

According to Sujin he's 17 years old.
He's half French and half Korean. He speaks fluent in both. He moved here a two years ago and is the president of the student council. He's very quiet but if he says something everybody will listen. He sleeps in class but he always gets the highest grade in the class. He is very polite and helped me around the school on my first day. There's not much else to say about him, he's busy so I don't have the chance to talk to him much. He's a pushover, so our homeroom teacher takes advantage of that and makes him grade papers, and other things.

According to Sujin he's 18 years old.
He's very blunt, escpecially when it comes to music. On my first day in music class, I couldn't sing a song right and he told me everything that was wrong. He would stop me in the hallways just to say that I looked like I gained weight. I like honesty, but can't he be a little bit more nicer when saying that I gained weight? Eunmi says he was part of a band, but due to some circumstances, he had to quit. The bad was really popular too. I see him surrounded by girls asking why he quit and other things. But he gets rid of them by saying some mean things. There seems to be bad blood between him and Minho. Jiseung likes to keep promises, even the ones he had with Minho.

Her twin brother is Minho. She always give me lollipops and acts like an older sister to me. Minho is very affectionate towards her. She has a scar on her right cheek but she covers it up with a bandage. She doesn't talk much and she is very emotionless. Just like her brother, she gets into fights. Her hat is very distracting, and she's only wearing it because Minho bought it for her. She dyed her hair the same color as Minho's hair. 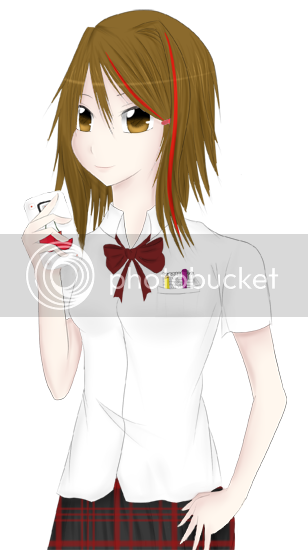 All I can say about her is she is a stalker. She knows almost everything about a person in the school. But I tend to ignore her "juicy" information about guys. She's the president of the school's newspaper. She gives me the monthly newspaper and tells me to read it. She's always pestering me. Her father owns the Cherrii company,which is the best electronic company in South Korea, so she always get these "stalker" gadgets.(example: her cell phone contains four cameras, records voices at all times, and it can track down any person if it scanned their DNA.)

She knew Hiroki when they were younger. She was the one who taught him how to speak Korean. She is always trying to talk to him, but he ignores her. She wears a necklace that Hiroki gave to her when they were younger. She's very mature but she wears frilly clothes to get the attention of Hiroki, because apparently he likes "cute" girls. She says she knows this because he plays some kind of game and always go after the cute girls. She is very rich, but she has no manners.

She's dating Seunghyun. She's very shy but she wants to be a idol. She is bad at everything, except for singing. She's very polite and I help her with her homework. She doesn't have many friends, but she tries to be nice to everyone. She gets bullied a lot.

This is my first VN, so hopefully the demo isn't too bad! ^-^ Oh and don't click the bonus or help, they won't work!

Just some questions for you to answer after you finish the demo (though you don't have too...)
1. Who's your favorite character and why?
2. Is there anything I should fix?
3. Your opinion of the demo?
Critiques are greatly appreciated!

Hmm Takada Hiroki's arms look a bit to small just pointing it out
Check out my WIP Prologue: Caged Bird!

ah, thanks ^^ I'll see if I can fix that!
A Mysterious Note <----Now with demo!
My DeviantART account
Top

In the description you said Bora's father's company was scammed by her fiance. She's 16 and engaged to be married?
Is this common in Korea?
All of my VNs are at http://wolflore.net
Some are at http://www.the-new-lagoon.com. NSFW
Poorly done hand-drawn art is still poorly done art. Be a Poser (or better yet, use DAZ Studio 3D) - dare to be different.
Top

Something new! All I see sometimes are all Japanese~:)

Good luck! This has potential ^_^

This looks great, I love your art.

@fleet
Um no it's not common at all ^^; if I remember correctly back in the day they would be engaged at an early age, but now only a few families do this.

@Lumen_Astrum
Thank you for wishing me luck ^^ and I know what you mean, most games I see are set in Japan.

@Aleema
Seunghyun does where glasses when he's only studying, but I'm thinking of an option where if you say you like him wearing glasses, he'll wear it for the rest of the game. And later in the game you'll find out why he's stalking Minho ;D

@Nekosousei
Thank you >////< not many people complement my art. I'm trying my best to get the demo finished, I've only coded the first day, but I keep rewriting the script....(blame my OCD)
Last edited by Death_HUG on Mon Jun 27, 2011 11:35 pm, edited 2 times in total.
A Mysterious Note <----Now with demo!
My DeviantART account
Top

Looks interesting and the art looks really nice.
And I love the main character's attitude! She seems snarky. ^^
Good luck~

Death_HUG wrote:Seunghyun does where glasses when he's only studying, but I'm thinking of an option where if you say you like him wearing glasses!

@SilverxBlue
haha, okay I'll add it ^^ and I'm glad that she seems snarky! I wanted her personality to be something like that.
A Mysterious Note <----Now with demo!
My DeviantART account
Top

I feel kinda guilty, because I like Oh Seunghyun best but he has a girlfriend already.

And that would be very nice if you got the option to tell him that.

I'd be torn because he'd look nice both ways. I guess I'd just have to play his route twice~
Will edit/proofread for cookies.

@Riviera
Maybe playing his route the second time will get rid of the guilt? lol >.< and yes, i like that option too so I'll probably add it early in the game.
A Mysterious Note <----Now with demo!
My DeviantART account
Top

Seunghyun wears two pairs of glasses? lol. I think "absent-minded" should be added to his profile XD
Top

The sprites look really good. So far, my favorite is Jiseung ^^
Can't wait to see how this turns out. :]
Top

@Snow Blossom
lol, yeah he wears two pairs of glasses >.< and know that I think about, he can be pretty absent minded. ^^
@RemnantDream
Thank you ^^ I'm glad you like Jiseung! (He was the only character that I had to draw multiple times >.>)


I started re-writing the story yesterday, but my grammer really isn't the best...so I was wondering if anyone wanted help me and proofread it?

Since I'm in a really happy mood(I passed my AP test!!

) I wanted to show you guys the wip main menu! So, what do you think of it?