Finished games are posted here, once they've been tested and are ready for wide release.
Post Reply
48 posts
Message
Author Welcome to the Literature Club! It's always been a dream of mine to make something special out of the things I love. Now that you're a club member, you can help me make that dream come true in this cute game!

Every day is full of chit-chat and fun activities with all of my adorable and unique club members:
Sayori, the youthful bundle of sunshine who values happiness the most;
Natsuki, the deceivingly cute girl who packs an assertive punch;
Yuri, the timid and mysterious one who finds comfort in the world of books;
...And, of course, Monika, the leader of the club! That's me!

I'm super excited for you to make friends with everyone and help the Literature Club become a more intimate place for all my members. But I can tell already that you're a sweetheart—will you promise to spend the most time with me? ♥ 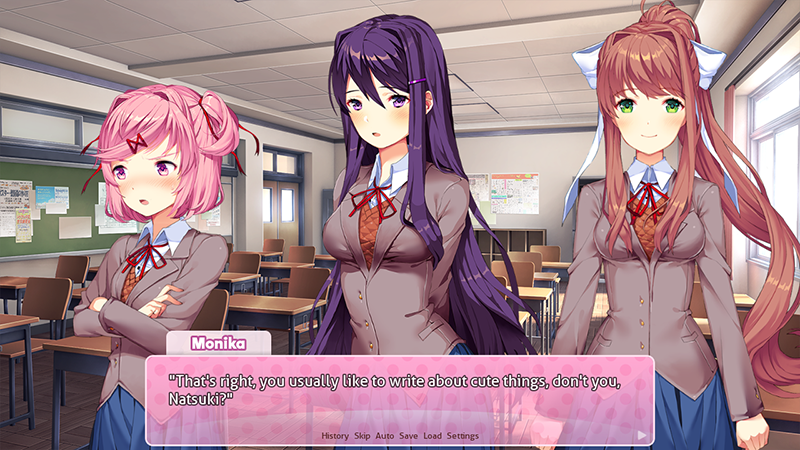 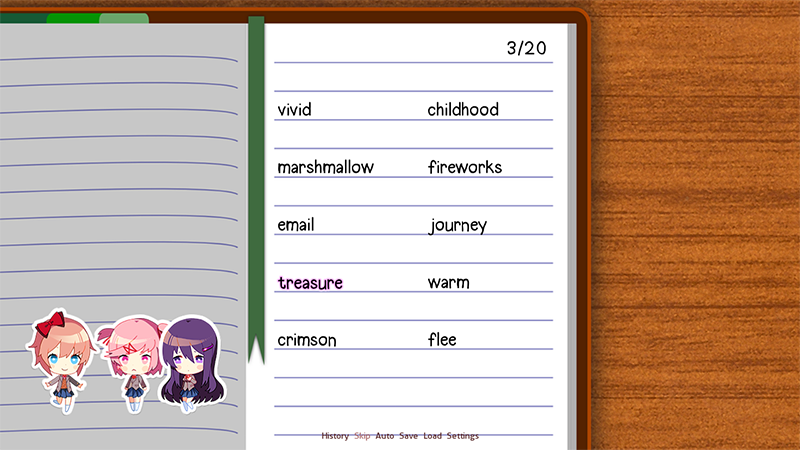 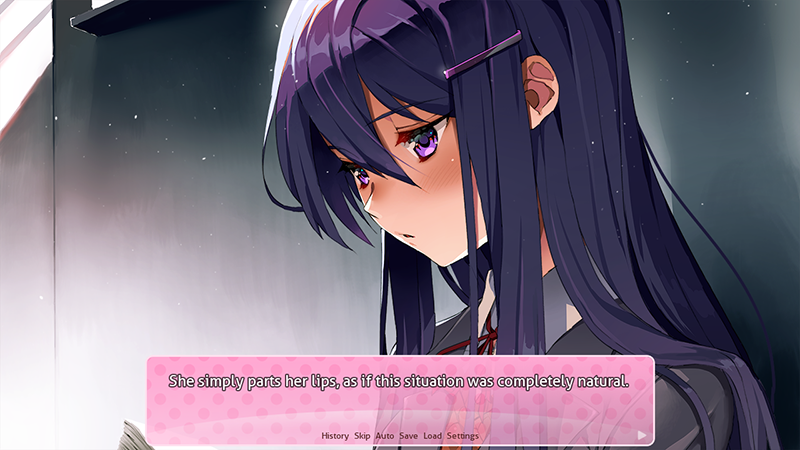 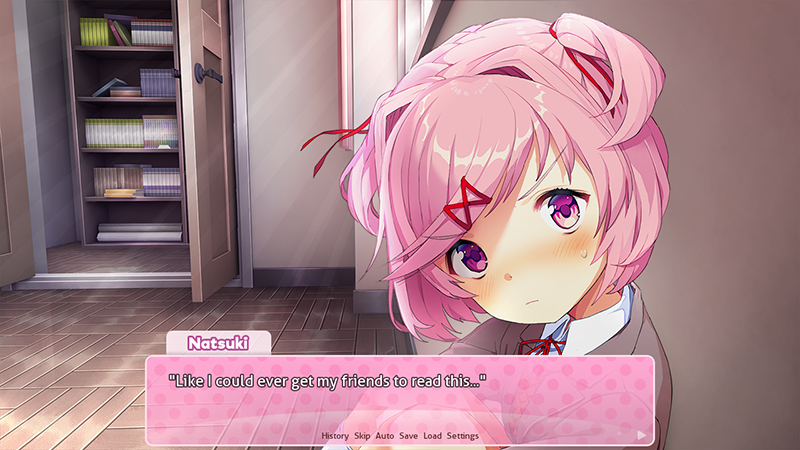 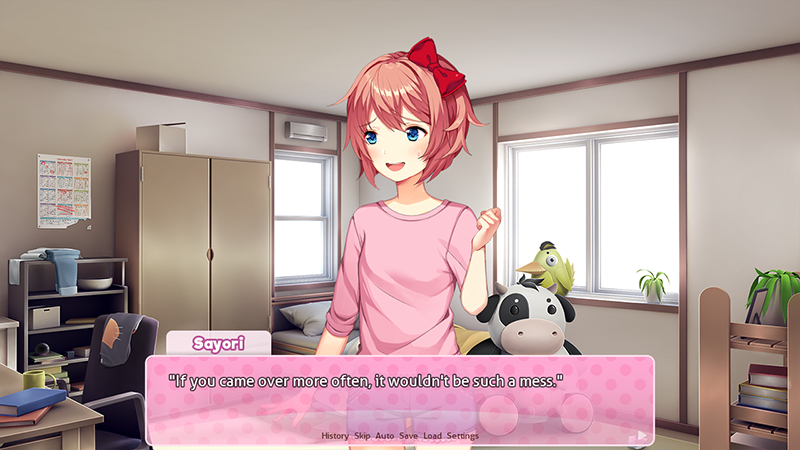 Doki Doki Literature Club is produced by Team Salvato, a brand-new development studio hoping to make our mark on the OELVN community right from the beginning. The game has been in development for almost two years and contains more than 75,000 words of irresistibly cute and charming dialogue for you to enjoy. Each chapter, you will play a short poem-writing minigame and grow your bond with the club members who enjoy your poem the most. As the club members slowly come out of their shell, you will hear them compare your poem to your previous ones, or even complain that you're trying too hard to impress the other club members! Start to finish, the game is 4-5 hours long, but there is also plenty of replay value.

This game is not suitable for children
or those who are easily disturbed.

Played this game. MIND BLOWN. I'll be leaving a more detailed comment when I manage to explore the game more thoroughly and unlock more content, but I just wanna say WOW this VN is destined to be in the folder where I keep all the games I've played that I just cannot bear to delete. I started playing this cute-looking game for a quick and light-hearted fix before I buckled down to homework, and whoops it's 2AM. Just top-notch work, dudes. <3 <3 <3
Completed Games: Flights of Fancy (NaNoRenO 2019)
Top

What the hell did I just read?
Mindblowing. Totally awesome. It's not everyday we get to see gems like this.
Having a second layer inside it was completely unexpected.
That's where things become even more strange, in the name of certain goddess.
щ (ºДº ) щ
Top

I just read this today and wanted to congratulate you on a job well done!
All of the meta stuff was really disturbing and fun. I was especially pleasantly surprised when I realized I would really have to delete Monika's character file to progress, so nice job with the programming of stuff like that. And even before any of that happened I was really enjoying reading the different characters' poetry - you managed to give them all pretty different styles and also foreshadow a bit about their problems, which was really interesting.
Some of my friends have been reading it too, so it's been really fun to discuss it with them and see their reactions.

very very good! everything is impressive and polished. and while i am no anime connoisseur, the particular style in which the characters are drawn is very neat, i very much like the eyes. sweet and bubbly to the end!

the credits scene and monicas letter is really the final end, right? i have a slight guess that if you pick exactly the right words in the poem puzzles, there is a secret, happy ending. i dont have the tenacity to actually test this theory though
my first thought, after the sayoru's hanging and the glitchy restart, was that the story is about the main character trying to rewrite his own memories, haha.
Top

If anyone is interested, I wrote up some more detailed thoughts about DDLC here: https://bunnyadvocate.tumblr.com/post/1 ... ature-club.

TLDR: really great, polished game with fantastic technical execution, but it sacrifices some characterisation for it (although due to the nature of this game, that's a sacrifice worth making). I'm really looking forward to seeing what you produce next~
Top

Give me Monika back, she did nothing wrong >:^(
My Current Writing Project: viewtopic.php?f=47&t=37699
Manipulation Teaser Demo: https://drive.google.com/open?id=0BzJ4E ... zV6TWVaclk

Oh my god I love this game so much, I'm kind of obsessed with it. I will definitely play it multiple times to get any possible ending, it's so mindblowing. Thanks a lot for making this game.
Top

By damn do I love this VN. I commented on it way back in May and was excited to play it back then, but of course I had no clue how amazing it was until I played it in full for myself. I've recommended it to so many people I've lost count how many times. Hell, I've even done fanart for it on my twitter, and I've never done real fanart for an EVN before (I drew Monika a couple of times, as she will always be best girl).

I'm very excited to see what you guys will make next, and I'll be supporting by buying the fan pack

I usually don't play bishoujo games, so I wasn't planning to play this one. But the promise of some psychological 4th wall stuff + such positive responses made me give it a try.
And, what the heck, even in the beginning it's a pretty nice experience. Can't wait when shit hits the fan

A real fun and unsettling game with some real nice tricks and some real dedication. I mean, it's not that common for the developers to actually have a proper amount of new/adapted dialogue between new games instead of just rushing things to where they left off, and that there were actual genuine routes like one would expect of a regular dating VN before the first disturbance. And how long Monika's dialogue could continue, that's just insane to keep writing additional lines and coming up with new stuff out of the blue.
I was actually real sad I had to 'resolve' that to get to the real ending, I never wanted Monika to be, you know, what happened. She protected me during the actually creepy and disturbing part that made this the scariest horror game I've played all year. Haven't been this scared of a VN like this since Everlasting Summer.

in the final 2 acts of the game.

and while i'm in spoiler tag mode i should mention how much i liked the 'space classroom' with monika eheh, i might have to go back to find some more of her musings on life and philosophy XD
and it did the super creepy thing where it grabs my name from windows argh
that always throws me into some kind of mild panic

i wouldn't say i'm a fan of horror games, but i enjoy things that are like this with some surreal elements and unexpected turns.

and i look forward to your next game

Libitina ? idk how people even go about decoding encrypted code i guess there are tools out there for that kind of thing XD
current project - Departure Lounge
past projects at sleepyagents.itch.io <3 website/blog at http://www.sleepyagents.co.uk <3 collabs etc. listed at projects.sleepyagents.co.uk/all/ <3
Honest Critique
Top

That was awesome. The characters are so cute and you can't help but get attached.
And it was so creepy to play. I didn't see those stuff coming at all! By the way, you got a walkthrough for this? I already played the whole thing once but I heard there's a good ending? I got the bad one. I heard you could get the good one by collecting all cgs. From what I saw on the end credits, I'm missing one of Natsuki's I think... getting up the shelf or something. I dunno how to get it and I made all my poems something Natsuki would like but I still miss it. Also, is it intentional that no matter how much I make my poems something for Natsuki in the 2nd playthrough, everyone would comment that it's something Yuri would like and even Natsuki is annoyed. I need help cause I don't want to have to replay the game again after a 2nd time. I have plenty of saves and the game zip is still with me. I just need to know how to get that one cg. Help?
Anyways, Natsuki is my fave girl. She's so cute and even if she's a tsundere, I like how she was handled.
Playing games are wonderful. It's like living another life although short, yet it's unforgettable.

Saw this game when it first came out and my friends kept posting and talking about it and telling me to play it.
To be honest, I was really busy with exams and not really in a mood for otome games, so it took me awhile for me to actually get around to playing it, but when I finally did... IT WAS AMAZING.
I really, really like what you did with the programming, to be honest, that was what surprised me the most. Like I don't know much programming, so I can't really comment, but I wasn't expecting all those special surprise nuggets that was in the second half of the game... given how it was made in Ren'py. Not that I'm saying Ren'py is limited or anything, but this is my first time seeing it being used that way haha. Especially how the game makes you go into the folders and delete stuff, as well as putting in that little ability of Monica to detect when you're recording... I really, really liked it!
Great job! 10/10 would recommend!

I also really love the art.

Doki Doki Literature Club has now reached as far as IGN's Game Scoop podcast. I follow this show more often than not, since it sometimes talks about the latest AAA video games, but also mostly-forgotten Sega Saturn shmups or mid-1980s arcade titles. I figured that they might eventually talk about VA-11 HALL-A since it's kind of a graphic adventure and since it just got a console port. I didn't expect that they would discuss a straightforward computer exclusive such as DDLC.
Top
Post Reply
48 posts