A place for game announcements, and for people to discuss games being made.
Forum rules
Please read the sticky before creating a new topic. Linking to Kickstarter/Crowdfunded games requires a demo.
Post Reply
11 posts • Page 1 of 1
Message
Author 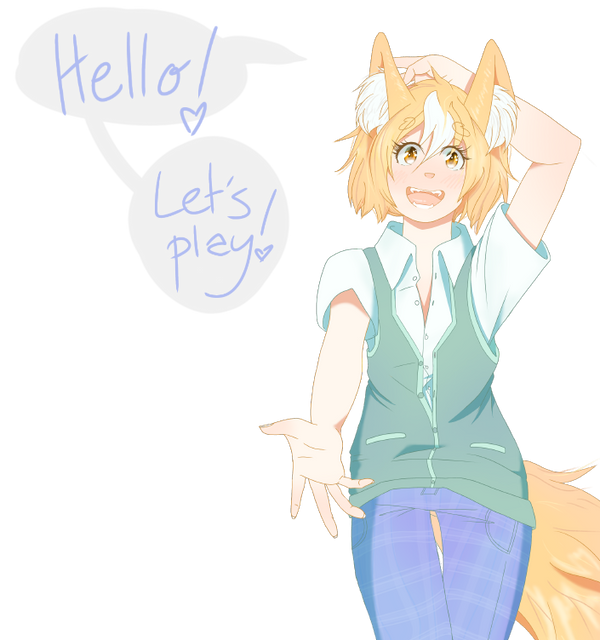 Plot:
Have you been playing Moeroge games like Nekopara, Wanko to Kurosou, or Nekonin and thought to yourself: "Why are there slaves everyone seems okay with, and where do they come from?"

The year is 2054 and Helix Scientific is here to answer your (and my) long overdue call for cute cat people. For an exorbitant price you too can have your own Felix, a lovable (f*ckable) humanoid cat of your very own. Grown from trademarked DNA entirely within their facility, you can rest assured they will come to you ignorant and naive of their place in society. These Felixes are grown and raised with cutting edge technology and attention to detail: these are limited edition luxury products, so place your order soon.

Current Build
(This version is functional but not perfect! It has Part One of the story set up, and is mostly for people interested in deciding if they want to help out)


An advertisement from Helix Scientific for the Felixes

The story is told from within the walls of Helix Scientific through the eyes of Addison, a trans Felix who had to be taken off the sales list "so not to confuse the costumers". He is now the Staff Companion, meaning he knows a lot of people very intimately, especially Dr. Kronauer who loves to pull Addison aside and dote on him. He is happily living his life, taking care of his siblings yet to be adopted and spending down time on his art and coloring. However, not everyone likes his "companionship". The newest staff member, Dr. Moore, seems quiet and even grumpy at times. An even bigger surprise is his brother Pumpkin has been pulled off the sales list as well! Addison will have to juggle his schedule to try and open everyone's heart to healing. 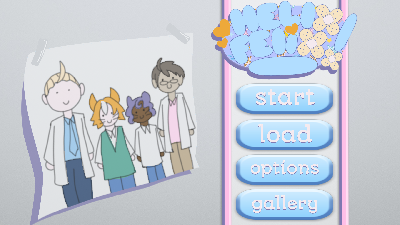 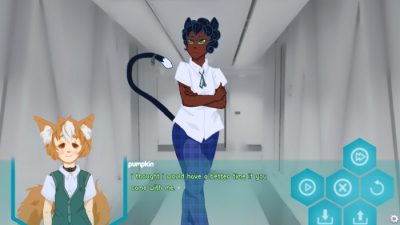 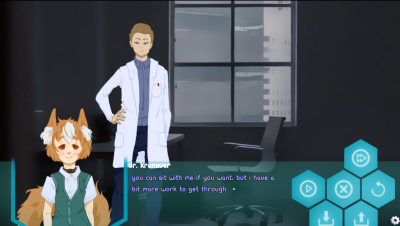 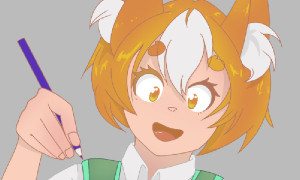 Addison:Ever since being taken off the sales list ten years ago, Addison has been comforting Helix employees as Staff Companion. That's not his only job, though – he also works with the young Felixes who have yet to be adopted, helping them learn all the things they'll need to know in the outside world. 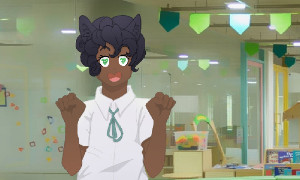 Pumpkin: Enthusiastic, upbeat, and maybe a little over-the-top, Pumpkin is the new Brand Mascot for Helix Scientific. His new role consists mainly of hamming it up for the cameras – no problem for someone so confident and easygoing! Right? 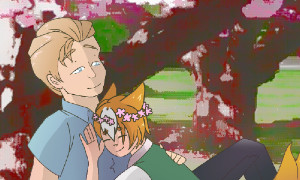 Dr. Kronauer: He's handsome, he's charismatic, he's the lead pharmaceutical chemist at Helix Scientific: meet Dr. Lukas Kronauer, PhD. He takes his job seriously and has been spending a lot of time working lately– not that it stops him from pulling a little rank in order to get more time with Addison… 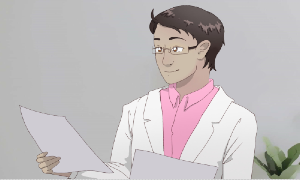 Dr. Moore: Felixes aren't Dr. Steven Moore's specialization – he started his career as a pediatrician for human children. He's quickly bonded with the kids, though, thanks to a kind demeanor and a bottomless supply of sweets and stickers. Despite this, he seems uncomfortable at Helix, particularly with Dr. Kronauer – what could he be thinking?

Themes:
I wanted the game to be overly sugary and cute to mirror the (R18) neko games of the past and to somewhat highlight the themes of abuse and sex work. I've always been captivated by these strange worlds of "catgirl" games. In these worlds a whole new species lives alongside humans as second class citizens. They are unable to live independent lives, unable to go outside alone without identification or leashes, unable to hold most jobs. They are sentient property to be owned.

Abuse, negligence, and the true nature of this dystopian system is often hinted at in these games, but never truly explored. I wanted to change that. Humans created this species to be it's plaything. To be an aesthetically pleasing and kink fueled slave. (The legal system can't call then human if there's no human DNA.)

I am still looking for people to fill certain rolls.
Art Consultant or Art Director: NEEDED. As an amateur I need guidance on where I'm going wrong.
GUI Artist: My current GUI is acceptable but I would love someone with experience to come in.
Background Artist: My current backgrounds are *passable* but I would love someone with experience to join. This would be for all 23 backgrounds as well as several backgrounds for the CGs.
Sound Director: Filled by Farakk
Programming: Filled by Tanix and Baddani
Writing and Editing: Filled by HarukaNami and PruJo

To learn more about these rolls, visit our Help forum:
viewtopic.php?f=59&t=57135

Thank you everyone for being an amazing forum! This place has already helped me so much!!!
Last edited by briarbun on Thu Mar 12, 2020 7:26 pm, edited 32 times in total.
Top

This sounds like a really cool idea! I'm definitely interested in seeing some of the social commentary aspects of the story. Are there any specific other catperson games or media that you're planning to satirize, or is it more just the general concept?

parttimestorier wrote: ↑
Mon Apr 22, 2019 3:04 pm
This sounds like a really cool idea! I'm definitely interested in seeing some of the social commentary aspects of the story. Are there any specific other catperson games or media that you're planning to satirize, or is it more just the general concept?

Honestly the only one I really know of is Nekopara- the general concept is more universal though, ingrained in anime culture. I knew about cat-people when I was 10 (maybe through Tokyo Mew Mew, but most likely just through osmosis) but only found Nekopara 15 years later.

I'd love recommendations of others to look into for satire fodder. I think Loveless is the only one on my look-into list at the moment.

As far as social commentary, I think just a look at the cast shows I'm trying to draw parallels to LGBT+, Trans, and racial structures/discrimination. But I want to do it really... Correctly. It'll be a hard line to walk, since I don't want the story to come across as a satire, but I also don't want it to glorify the kinds of relationships and behavior that I'm "parodying". Really I want the story to be real and meaningful, but to really dig into and explore this dystopia that others have created (see: Nekopara) but never addressed.
Top

briarbun wrote: ↑
Mon Apr 22, 2019 3:27 pm
I'd love recommendations of others to look into for satire fodder. I think Loveless is the only one on my look-into list at the moment.

A couple other catgirl VNs I've heard of (but haven't read, so I'm not sure how useful they'll be to you) are Neko-nin exHeart and Let's Meow Meow. You might also be interested in ebi-hime's Sweetest Monster for another more critical take on that trope. Good luck! I'm looking forward to seeing more updates.

Huge update with progress, screenshots, and more! I hope I can get some thoughts/feedback before I open the beta/demo
Top

Do you think the premise of the game sounds interesting?

Yes! I think this is definitley a unique take on the genre, and am excited to see how you mold the world and lore of the game! It's exciting the demo is coming out soon

! The themes you have going is something I've never really seen a VN take on, so it'll be interesting to see how it goes.

Would you want a game like this to simply explore the world, or to have a moral lesson?

If it is interesting to you, why?

I'm part of the LBGT+ community, so anytime a game pops up on the forums that has LGBT+ themes or characters I try to check it out. That, and the serious topics that you're trying to present interest me too, especially because of the lightheartedness of most of the characters and art so far.

What would you hope for in a game like this?

I'd hope for all the topics to be regarded seriously, without jokes at the expense of sex workers or trans people, but also I think I would want our main character to be likable and relateable too-that would definitley help those who aren't necessarily connected to either of your main topics understand the game as a whole a lot better.
Top

I'm part of the LBGT+ community,

Welcome!! I'm so glad you're interested! This is really helpful advice. As part of the LGBT+ community myself I would never want to make jokes at anyone expense, but thank you for bringing it up. You never know when someone might make a mistake or a cruel joke.

I'm not very good at stories with morals, which is why I asked. I'll make sure I put extra effort into subtext and plot. My strong point is world building and ideas: not so much on plot. It's been challenging to make the story feel the way I want it to, and not just "Moeroge, but weirder."
Top

I remember seeing this in the NaNo forum, I'm glad you're continuing with it! ^_^

I really admire your goal with this story, catgirls are adorable but stories involving them always tend to make me vaguely uncomfortable because, like you said, they tend to be treated as second-class life forms by the other characters, or at the very least as naive and overly sexualized characters.

Will definitely be looking forward to your progress on this!
hey hey I made a thing
Top

I've tried out a few of the catgirl visual novels, and I have to concur with Zelan: there's something that's uncomfortable about how they're usually presented. Seeing a premise that looks directly into that particular issue is really interesting. I wish you the best of luck.