Ideas and games that are not yet publicly in production. This forum also contains the pre-2012 archives of the Works in Progress forum.
Post Reply
120 posts
Message
Author

A girl that is to be sacrificed in a ritual. She was chosen for her excellent health.
Her death is to bring the king new life and fertility to his wife.
She has already given up on live and is waiting for the end when she is called to her final banquet, held by the king’s brother and the priest who is going to sacrifice her.
Not caring about protocol the girl begins talking to the two powerful, yet very different men...


In the game there are three, maybe four important characters - including the heroine herself.

Alua – The heroine of the game. She is a teenage girl from a peasant family. She has spent her life previous to the game working on the farm her family owns and, like most of her family, has never been ill. Alua is aware of the rules and knows that she is in no position to talk to people above her birth - but facing death she thinks that it cannot get any worse.

Krymar – The king’s younger brother. He has made a name for himself in the war and is known for his beautiful yet deadly swordsmanship. In public he stands behind his brother in every aspect but is he really loyal to the bone?

Xares – The high priest of the kingdom of Askeen. He has gained his current position at a young age and his name makes mighty men shudder in fear yet it does not seem like he is a serious person... 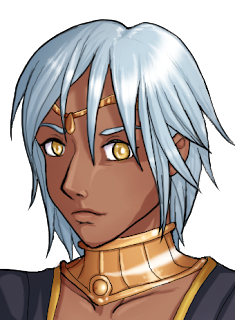 Serenz – The king of Askeen. After his father’s sudden death he became king but problems arise on after another. The biggest is the lack of an heir and in his eyes there may be one way to change that...

While working on Perios I have been doing this little project on the side.
I am writing it in some of my spare time between classes and compared to Perios it is rather short.

What to expect:
6 Endings
2 obtainable guys!

I have found an artist!
It's Tachyglossus!

Ooooh! A priest? :3 That's it, your story is approved by me and put on my to-play list! <333 Good luck on it and I do like the whole theme too, not just the fact that there's a priest in it! :3
Working on a visual novel : Caesar's Fate (GxB) : Follow me on Twitter or visit my Website for updates!

Absolutely looking forward to it!
Go on!
Take a look at Perios - Chained Sorceress!
And also on Sword vs. Staff, my short new project...
And, of course, our blog!
Honest Critique
Top

Oh my~ The story sounds very interesting. King's brother.. hhmmm =3 I am looking forward to it.
Top

if you need a proofreader i'm ready to go

It's interesting!
make me remember about jeanne.. who got killed T^T
Whee~ I'll look forward for this!

the priest. hohoho
xD, If you need any help, I'll be glad to help!
Free Sprite For Use! | Commission me here! | My Twitter | My Ko-Fi
Top

thank you for all of you kind comments.
@ Elenakiara: I do have a thing for priests as well, thats why Xares is there!

@ Chrizine: you will probably be the first to read more about it...

@platonicheart: I will probalble come back to the offer. English ist not my first language, so I would be really glad for some help.

@yuuki: jeanne sure was a tragic woman... but she kind of stood up for herself... Alua was simply dragged away from home. But I do see the difference

Once I have made a little progress I may ask you for some advise on the GUI... it always looks wrong when I do it.
Please visit my projects Perios- Chained Sorceress
and Final Banquet now with demo!

Arithra wrote:thank you for all of you kind comments.
@platonicheart: I will probalble come back to the offer. English ist not my first language, so I would be really glad for some help.


sure, just pm me anytime.... waiting to see your finished project by the way

A small update on what to expect from the game:
You have to be prepared to read a lot of cause and there will be lots of choices because the main part of the game is the discussion you have with Xares and Krymar during the dinner.
Your reactions and comments to the topics will influence how much the two of them like you.

In my planning the game has two endings:
Two for each character and the true one.
The last one is the one I came up first when Final Banquet was supposed to be a novel. I'm not sure how it will be possible to get that ending, but I will try my best.

I hope that the endless menus don't any you.
So far I have finished typing the stuff I had already written down on paper. Now the real writing starts.

Since I can't draw to well I a searching for an artist now!
If you are interested or have another question please pm me!

The game contains 419 screens of dialogue.
These screens contain a total of 3,902 words,
for an average of 9.3 words per screen.
The game contains 29 menus.
Please visit my projects Perios- Chained Sorceress
and Final Banquet now with demo!

This looks promising! Keep up with the good work, I would loooove to play your VN *_* !
Top

Thank you, because of my finals it might take some time, but I am doing my best.
Thank you for the support!
Please visit my projects Perios- Chained Sorceress
and Final Banquet now with demo!

Haha, I totally understand you, since I'm actually piled up under a pile of projects and books to study... >.< I actually popped in to see if anything cool was worth a couple of my precious minutes and your topic made the cut! =D

So yeah, me, I don't mind lots of menus!

I'm trying not to overload on too many menus myself as I'm writing my story. xD I can't really draw, so I'm not much of a help in this case. D: I'm still sending you my support via airways! xD
Working on a visual novel : Caesar's Fate (GxB) : Follow me on Twitter or visit my Website for updates!

Support received!
I happy that you like my project.
It's not that I was trying to use as menu menues as possible.
But since you have to react in a conversation there are.. a lot of them.

The only good thing about finals is, that I don't have to go to school till the day I write them.
Abitur... I'm comming....
Please visit my projects Perios- Chained Sorceress
and Final Banquet now with demo!

Hehe, yes, but not going to school in this case is supposed to mean sitting around studying

Take a look at Perios - Chained Sorceress!
And also on Sword vs. Staff, my short new project...
And, of course, our blog!
Honest Critique
Top

I do both, but I do have to relax sometimes you know?
And if no one keeps me from my studies with false alarms, all is well.
Please visit my projects Perios- Chained Sorceress
and Final Banquet now with demo!

And my blog for more updates!
Top
Post Reply
120 posts